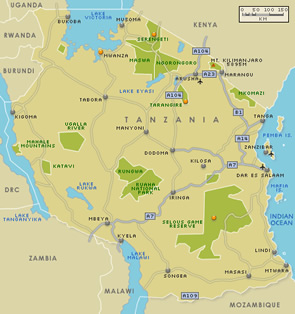 Just south of the equator, Tanzania borders Kenya and Uganda in the north; Zaire, Rwanda and Burundi in the west; and Zambia, Malawi and Moçambique in the south.

Tanzania's culture is a result of African, Arab, European and Indian influences. The African people of Tanzania represent about 120 tribal groups. The largest group are of Bantu origin including Dukuma, Nyamwezi, Makonde, Haya and Chagga. The Maasai are of Nilotic origin, as are the Arusha and the Samburu.

The Tanzanians are friendly people, to foreigners and amongst themselves. Politeness, respect and modesty are highly valued.

Note that the right hand is usually used for eating, while the left is traditionally used for toilet duties. Immodest attire, public affection and open anger are disrespectful to the Tanzanian people.

The best months for climbing Mount Kilimanjaro are August to October and January to March. 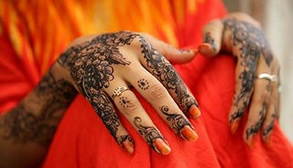 Tanzania boasts over 1 000 bird species, with Lake Manyara alone being home to more than 400. It is a year round birding destination, but at the height of the northern winter, some 160 species of migrating birds make their way south. Botanically, Tanzania is a treasure-trove, with habitats ranging from Afro-Alpine to semi-desert.

The months immediately after the two rainy seasons provide the best floral displays.

Tanzania offers excellent game viewing throughout the year as not all animals migrate and are year-round residents.

The official language is Swahili (Kiswahili), which is generally spoken, and various local languages abound. Kiswahili is the language the primary schools teach in. English is the second official language and the country's commercial language as well as the main teaching language for all the scientific subjects in secondary schools and higher education institutions. Arabic is widely spoken in the coastal areas, particularly in Zanzibar. 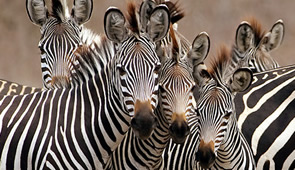 Generally, casual comfortable clothing is suitable throughout the year.

The most practical items to pack are:

When visiting Zanzibar, it is important for women to dress modestly out of respect for Muslim cultural beliefs, men should not wear shorts on the main island and women should wear dresses that cover their shoulders and knees. This does not apply on Mnemba Island. 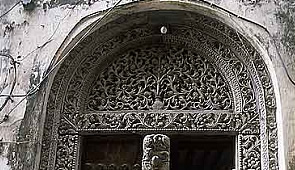